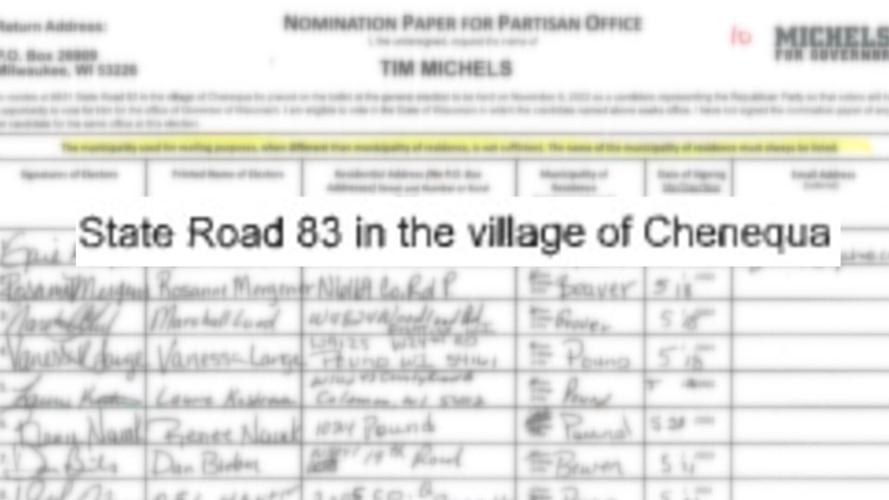 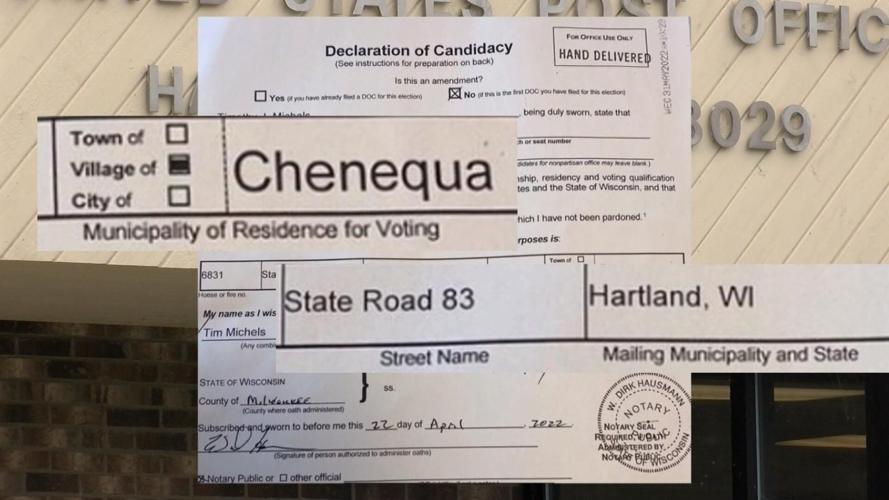 HARTLAND (WKOW) -- Wisconsin Democrats believe a technical mistake should be enough to remove one of the Republican frontrunners from the race for governor.

In a complaint filed with the Wisconsin Elections Commission (WEC), the Democratic Party of Wisconsin argues more than 90 percent of the signatures Tim Michels submitted are invalid.

In order to appear on the ballot for governor, candidates must turn in 2,000 signatures. The Democrats say, after removing all signature forms that listed the wrong mailing address for Michels, only 345 legitimate signatures remain.

The controversy comes less than a week after former President Donald Trump endorsed Michels, who owns the state's biggest construction company. Michels Corp. had been doing work on the controversial Keystone XL pipeline under Trump before the project was scuttled by President Joe Biden after the 2020 election.

Democrats say it's not the political winds, but rather, state law that dictated their decision to challenge Michels' eligibility.

"You can't just try to slip things like this by," Jeff Mandell, an attorney working for the Democrats, said. "If a candidate or a campaign finds problems with their nomination papers, it is their responsibility to fix them. Here, that was not done."

The challenge is based on Michels' home having a mailing address in Hartland. The house is technically in the neighboring village of Chenequa. Both places are listed properly on Michels' campaign paperwork.

"Under Wisconsin law, if the information in the heading of nomination paper is wrong, no signatures on that paper can count," Mandell told reporters.

The Michels campaign defended its signatures as legitimate, noting WEC staff rejected fewer than 200 of the 4,000 signatures it submitted.

"Tony Evers and his insider allies are feverishly working to keep me from beating him in November," Michels said in a statement. "It comes as no surprise that they launched a frivolous complaint in an attempt to keep me off the ballot, just days after I was endorsed by President Trump."

Democrats argue the Michels campaign knew it messed up because many of its most recent signature forms had the correct mailing address for Michels, listing Hartland on the header.

"Those minority of the papers that do say 'Hartland' are from the latter portion of the signature period," Mandell said. "There are no papers that include the full mailing address from before May 1."

The WEC has collection of previous challenges to a candidacy it has resolved in the past. Two of the issues relate to whether a candidate has listed a proper address for themselves.

In the other case, the WEC has approved challenges over candidates' paperwork that failed to include "basic address information (number and name of street)" on the signature forms.

27 News contacted several political science and election law professors who either did not respond Monday or said they weren't in a position to weigh in on whether the Democrats' challenge had a real shot of succeeding.

The commission deadlocked in 2020 on address issues tied to the Green Party's presidential ticket. Eventually, the Wisconsin Supreme Court kept the Green Party off the ballot but on the basis of timing; swing justice Brian Hagedorn sided with liberal justices in a 4-3 decision ruling any changes to the ballot would cause too much confusion for voters.

The commission may well be on the verge of covering new ground at a time it's already in the spotlight over election administration issues.

Knudson is staying on until Assembly Speaker Robin Vos can appoint his replacement. Vos, who has endorsed Rebecca Kleefisch in the GOP primary for governor, told 27 News last month his appointee would be a "hard-charging conservative, activist with the base."

Vos is expected to name Knudson's replacement ahead of the June 10 meeting. Kleefisch, along with other Republicans in the race, former Marine Kevin Nicholson, and state Rep. Tim Ramthun, have pledged to eliminate the WEC and turn over election duties to elected officials.

Michels initially said he wanted to reform WEC before flipping his position to say he also supports disbanding the commission.

Driver killed in crash on Highway 61 near Boscobel

'If it looks sort of sketchy, it probably is sketchy': Officials encourage people to use best judgment before getting in Wisconsin's lakes

Two people hurt in shooting on Madison's north side