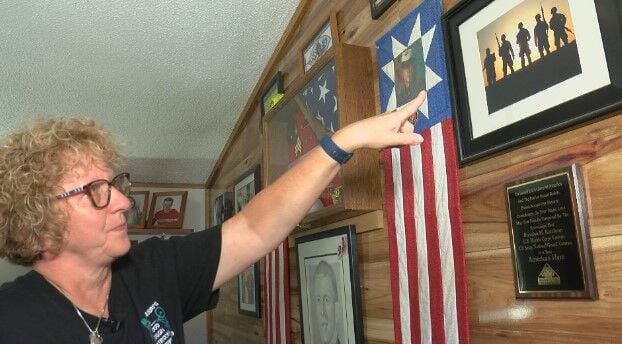 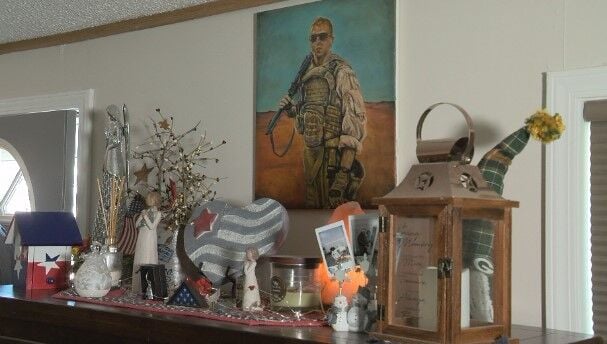 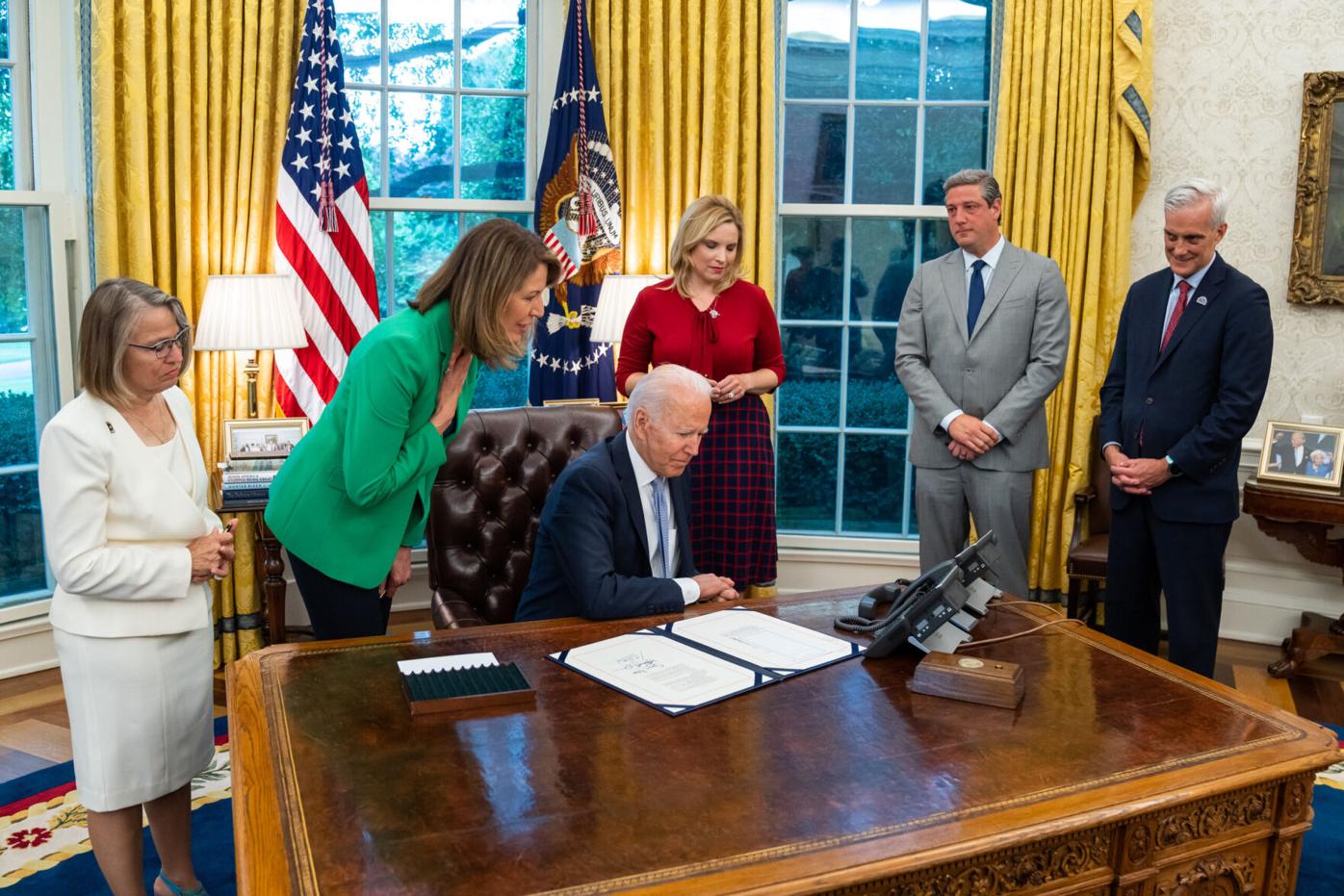 LAKE DELTON (WKOW) -- On a wall lined from floor to ceiling with photos and mementos, one framed image still stands out to Beverly Kittoe.

"This is probably the most meaningful picture that we have," Kittoe said as she pointed it out.

Against the backdrop of a bright orange sunrise or sunset - Kittoe isn't sure which - are the silhouettes of five Marines in uniform. You can't make out any faces but Kittoe knows her son, Brandon Ketchum, is in the middle.

Five years after his death by suicide, Ketchum's story was at the center of a push this summer to provide greater mental health services to veterans, particularly those in rural areas. Ketchum's 2016 death caught the attention of Rep. Cindy Axne, a Democrat who represents the southwest corner of Iowa.

27 News detailed how, in July 2016, Ketchum sought a fourth inpatient stay at a VA center. When he asked to be placed in a specific unit at the Iowa City VA, Ketchum, who'd served tours in both Iraq and Afghanistan, was told there were no beds available in that unit.

A report from the facility said Ketchum stormed off before a doctor would complete a suicide risk assessment. Without the placement he sought, Ketchum posted on social media, "Not only did I get a ‘NO’, but three reasons of no based on me being not f***** up enough."

Within hours of leaving the VA campus, Ketchum, 33, had shot and killed himself.

"I knew he was struggling"

Kittoe said in the months leading up to when she lost her son, she could tell Ketchum was in a really dark place. She said one story he relayed to her made it clear he was dealing with post-traumatic stress disorder, or PTSD.

Kittoe said she tried to comfort her son but he would often respond by saying she couldn't truly understand what was going on in his head, which Kittoe knew was true.

"What do you say to that? I mean, I just told him I'm here any time you want to talk," Kittoe said.

While she knew Ketchum was experiencing a mental crisis, she was still shocked upon learning her son had taken his own life.

"I knew he was struggling," Kittoe said. "I never, ever thought he would take his life."

At V.F.W. Post 8483 on the northeast side of Madison, the canteen manager, David Schultz, said he believes one of the most valuable qualities of the post is it's a place where veterans can find company without having to open all the way up about what's causing them anguish.

"We don't all just come up here and sit around and tell war stories," Schultz said. "It's kind of an unwritten, unspoken bond of 'You know that I know that you know' so to speak."

Schultz, who served three years in Vietnam, said he believes the VFW, and even the VA, will likely never have the capacity to meet the needs of every veteran who's struggling. He added, though, the government should prioritize working toward a point where professional help is immediately available for any veteran in crisis.

"Facilities and caregivers just get saturated to the point where there aren't anymore," Schultz said. "That's not an excuse, I'm not trying to make an excuse but to reach out and to have the facilities available is the first step."

Following Ketchum's death, the VA's Inspector General released a report that outlined its investigation into the Marine's case. The report found that while Ketchum "did not take advantage of all the services available to him," it also "identified some deficiencies in patient care by the system."

Those deficiencies included a failure to properly document missed appointments.

Nearly four years after the report's release, Congress passed Axne's bill providing three years' worth of funding for the creation of three new Enhanced RANGE programs at three VA centers around the country.

President Joe Biden signed the bill June 30. The expanded RANGE sites will allow for veterans near the three selected sites to have staff come out to see the veterans and possibly help them with everyday tasks, according to Dr. Clifford Smith, the Director of Field Support and Analytics for the VA's Office of Mental Health and Suicide Prevention.

Smith said the VA has also worked with non-VA hospitals near their centers to help ensure there's always an inpatient bed available for someone in crisis.

When asked specifically about what the VA had learned from Ketchum's death, a public relations representative for the VA interrupted the interview and said it was getting "off-track." When the reporter countered that Ketchum's death inspired the bill, which was the agreed-upon subject of the interview, Smith was cleared to answer the question.

"It was a tragic situation," Smith said. "VA needs to learn from all of those situations and how we can do it better to provide safety, access, and treatment to veterans when they're in need."

The VA has yet to announce which three sites will be awarded funding for the E-RANGE programming. The bill also calls for the Government Accountability Office to produce a report on the current state of rural veterans' access to mental health services.

"I just got a call from the President"

Kittoe said she did not feel like she could reflect on her journey until after she got a call on June 30. She remembers the caller ID said 'Washington D.C." Kittoe knew the bill had previously been passed by Congress.

"So I thought 'well I have to answer' and it was a secretary calling for President Biden and wanted to know if I would like to talk to him," Kittoe said. "I said 'well of course.'"

Kittoe said it was a brief call, about two minutes long. She remembers Biden mentioned the loss of his own son, Beau. From there, Kittoe remembers having to step back into her job and tell everyone who would listen.

"Right after we hung up. I mean, I went out—I work at a hair salon and I went out and there were other stylists there and I said 'I need your attention. I just got a call from the President,'" Kittoe recalled.

For Kittoe, the work continues regardless of the legislation. She admits she didn't get too caught up in the fine details of the bill but added she does want to know if it's actually helping to prevent what happened to Brandon from happening to any other veteran.

In the meantime, her focus is on the Ketchum's Got Your Six program. The nonprofit raises money to train therapy dogs for veterans struggling with PTSD.

Pandemic isolation took a toll on kids’ mental health, but treatment is backlogged — and some families can’t afford to wait