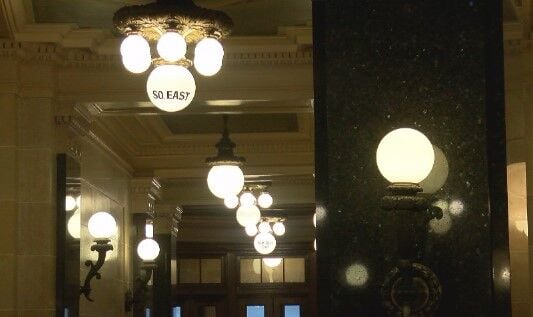 Some of the 40,000-plus lights that illuminate the Wisconsin State Capitol 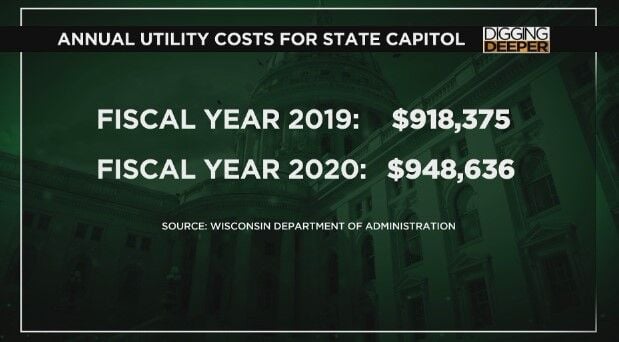 MADISON (WKOW) -- In addition to our own monthly utility bills, there are others we help pay without much thought - the ones keeping the lights on in public buildings.

The grandest structure shared by all Wisconsinites, the State Capitol building, runs up a costly tab each month.

Perhaps, that should come as no surprise given its approximately 40,000 light bulbs to illuminate and central air to heat and cool 525,000 square feet of space - to say nothing of the volume that comes with a nearly 300-foot dome.

What might come as a surprise is the COVID-19 pandemic, which saw more than 300 days pass without lawmakers approving any bills and the building closed to the general public for more than 400 days, had no discernible impact on the electric bills.

27 News obtained the last 36 months of the Capitol's utility bills via an open records request. The bills at first revealed some surprisingly cheap amounts due from Madison Gas and Electric; the ranged from anywhere between less than $50 to about $200.

A Power Plant of its Own

Department of Administration explained those bills were strictly for the few meters actually at the Capitol. A full accounting of the Capitol's utility costs revealed the Capitol has its own power plant.

Located about six blocks east of the square, the Capitol Heat and Power Plant has supplied energy for the Capitol, along with other state-owned buildings downtown, for more than 100 years.

While the plant once burned coal to actually power the Capitol itself, it now heats steam for the state buildings as acts as a go-between as it passes through voltage underground from MG&E to the Capitol.

"Back then, we actually did produce our own power here so they had a central plant that could control any state facility downtown," said Chad Bliefernicht, the Assistant Director of Facilities for the DOA who oversees the Capitol power plant.

The unique setup allowed the Capitol to maintain power even when an explosion at a substation knocked out power downtown two summers ago.

To this day, the building is a state secret as officials would not grant a reporter and photographer access inside the plant, even in its diminished role.

DOA officials explained they didn't want bad actors to possibly get a look at how the plant functions.

"We do not want anyone taking our 100 percent reliability down because they got into the plant," Bliefernicht said.

The total set of records revealed total electric costs of $918,375 in fiscal year 2019, which runs from July through June. In 2020, the cost grew to $948,636, even with four of those months affected by the COVID-19 pandemic that closed the Capitol to the public.

Comparing the three October bills illustrates how the pandemic had a minimal effect on electric costs:

Bliefernicht explained the DOA did not enact any cost-saving measures during the pandemic because the Capitol remains at full power no matter the situation.

"The Capitol's ready to go 24/7 no matter what. Just because it was closed to the public because of the pandemic doesn't mean we stopped operation whatsoever," he said. "We still have to heat it all winter, we still have to cool it all summer. Everything in the building is still operable at any moment in time."

Amy Barrilleaux, communications director for Clean Wisconsin, said they expect the Capitol to run up a hefty utility bill given its size and volume. She added the state should still make every effort to find energy efficiencies given those costs.

"It's the kind of building we really need to pay attention to," she said. "Gonna use a lot of energy to heat, cool, to run all those lights."

Bliefernicht pointed to an ongoing project converting each of the Capitol's lights to LED bulbs as an example of the state striving for energy efficiency.

DOA estimates it'll take two years to complete the project as officials said they won't change many of the lights until the current bulbs go out.

The LED bulbs use about 20 percent as much electricity as the current fluorescent bulbs. Bliefernicht said each replacement is somewhat intensive as the agency works to tune the new LED bulb to replicate the same lumen output and color temperature as the old bulb.

The lights outside the building that illuminate the iconic dome at night have been switched to LED too.

Barrilleaux said Clean Wisconsin welcomed the switch, noting it follows similar moves many in the private sector have already made.

"It's those kind of easy investments, the easy change-outs that businesses have been making now for years," she said. "So it's really important that the state also show that leadership and make those investments."

Digging Deeper: Safety in our schools

Digging Deeper: Safety in our schools