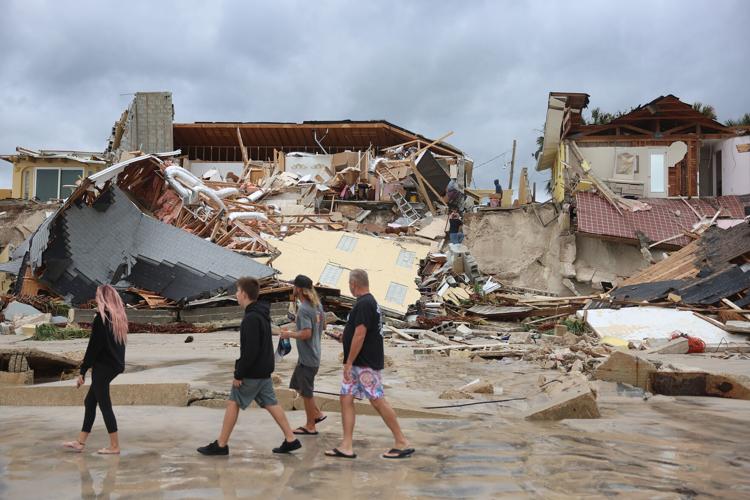 People look on at homes partially toppled onto the beach after Hurricane Nicole came ashore on November 10 in Daytona Beach, Florida. 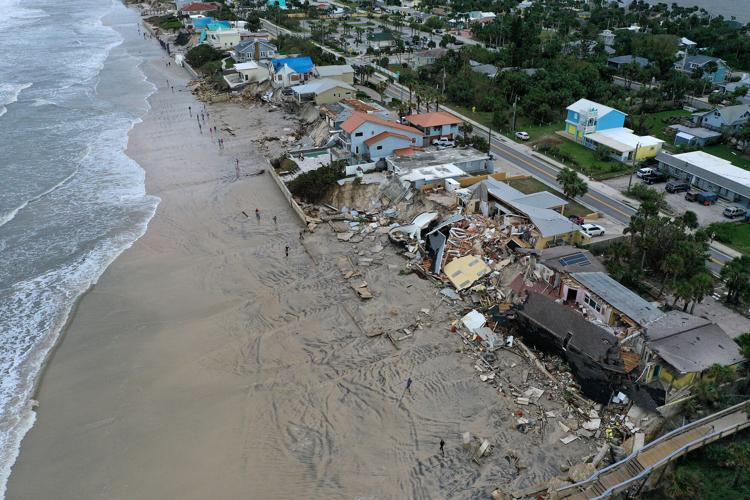 People look on at homes partially toppled onto the beach after Hurricane Nicole came ashore on November 10 in Daytona Beach, Florida.

As Nicole threatens the Carolinas and Virginia on Friday with tornadoes and flooding, Floridians -- many still recovering from Hurricane Ian -- are picking up the pieces after this week's storm killed at least five people and ripped apart buildings with its dangerous storm surge and powerful winds.

In Volusia County, Florida, at least 49 beachfront properties, including hotels and condos, have been deemed "unsafe" in the aftermath of Nicole, which hit Florida's eastern coast south of Vero Beach as a Category 1 hurricane early Thursday before weakening into a tropical storm and now a depression.

"The structural damage along our coastline is unprecedented," Volusia County Manager George Recktenwald said in a news conference, adding more buildings will likely be identified as compromised.

As Nicole turns to the northeast, a tornado watch is in effect for portions of northeastern North Carolina, central, eastern and southeast Virginia until 6 p.m. Friday, according to the National Weather Service.

As the storm -- the first hurricane to hit the US in November in nearly 40 years -- walloped Florida, Ian-battered coastal buildings were compromised even more by coastal erosion. Deputies went door to door Wednesday evacuating residents from structurally unsound buildings in Volusia County ahead of Nicole's arrival.

In Wilbur-By-The-Sea -- a barrier island community off Daytona Beach -- 22 homes were evacuated in advance after officials deemed them unsafe.

Then amid Nicole, some oceanfront homes collapsed into the ocean.

Trip Valigorsky unlocked the front door to his home to see a gaping hole leading to crashing ocean waves where his living room had once stood. Pointing to where the television and sofa used to be, he told CNN affiliate WKMG he was in shock.

"I was here Tuesday night and I kind of watched the wall deteriorate, and then I woke up Wednesday morning and the wall was completely gone, so I started evacuating," Valigorsky said. "And now here we are."

Homes nearly hung off cliffs and Daytona Beach hotels crumbled into the ocean in the storm's aftermath, drone video showed.

Tornado watches in the Carolinas and Virginia

Nicole is weakening as it passes Georgia and heads into the Carolinas, but it still poses dangers, CNN meteorologist Dave Hennen said.

The tornado watch in effect Friday covers about 4.2 million people, including Virginia Beach and areas just south of Washington, DC.

Isolated damaging wind gusts to 70 mph are also possible and more than 12 million people are under wind alerts from Georgia into the Carolinas.

Up to 4 inches of rain is likely through the weekend across cities including Jacksonville, Florida; Roanoke, Virginia; Pittsburgh; and Syracuse, New York, according to CNN Meteorologist Derek Van Dam.

The system is expected to dissipate Friday night as it merges with a frontal boundary over the eastern United States.

As remnants of Nicole race northward Friday through Saturday, its tropical moisture will be absorbed by a separate cold front, which delivered blizzard conditions across the northern Plains, Van Dam said.

Heavy rain and gusty winds in excess of 30 mph will make traveling along the Interstate 95 corridor tricky. Meanwhile, airline travel will likely be disrupted at many East Coast airports as the storm moves through.

As the colossal storm approached Florida, schools and universities closed, hundreds of flights were canceled, airports halted operations and some coastal residents were evacuated.

After Nicole passed through, streets were left flooded, roads and homes were damaged, and thousands were without power. More than 300,000 customers in Florida were affected by outages earlier; the number had fallen by late Friday morning to about 14,000, according to PowerOutage.us.

Two people died after being "electrocuted by a downed power line" in Orange County, the sheriff's office said in a news release. Two additional deaths are being investigated as possibly storm-related following a fatal car accident, according to Orange County Mayor Jerry Demings.

Also killed was a 68-year-old Port Canaveral man who had been on a yacht early Thursday morning as it was "being battered by the waves and the dock," the Cocoa Police Department said. After his wife called 911 to report her husband was in distress, rescuers took the couple to a hospital. He was later pronounced deceased, police said, adding the cause of death isn't yet determined.

Downed power lines in flooded streets are among a multitude of hazards residents must maneuver in the hurricane's wake as they return to their homes, and crews work to clear debris from roadways and conduct emergency repairs to washed out roads.

CNN's Rachel Ramirez and Jamiel Lynch contributed to this report.

'It's like dancing in a snow globe': Frozen Assets Festival officially underway

'First sled of the year for us': Having fun in January's first major snowfall

'We are finally back': Madison Parks hosts Winter Prom