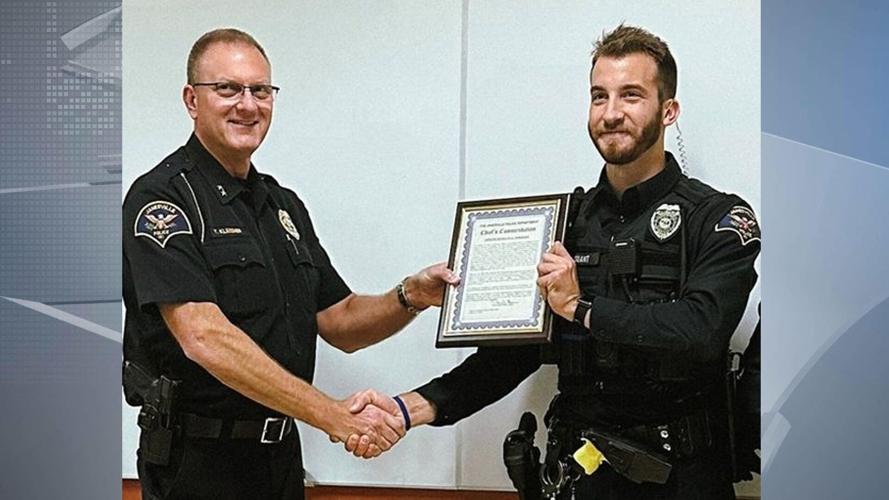 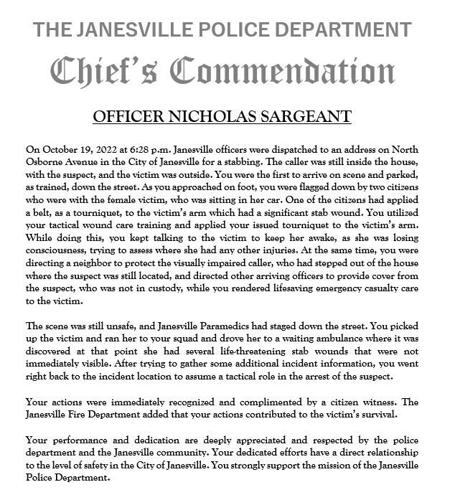 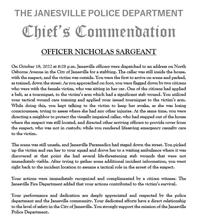 JANESVILLE (WKOW) — A Janesville police officer was honored with a Chief's Commendation for his quick response in helping a stabbing victim earlier in October.

On the evening of October 19, Officer Nicholas Sargeant was dispatched to an address on N. Osborne Avenue for report of a stabbing, according to the Chief's Commendation document the Janesville Police Department Facebook page.

The caller was still inside a home with the suspect, and the victim was sitting outside in her car.

Sargeant was the first to arrive on the scene and was flagged down by two people who were with the victim.

The commendation states that Sargeant continued to talk to the victim while doing this to keep her awake, as she was losing consciousness. During this time, Sargeant was working to determine if she had any other injuries.

At the same time, he was having a neighbor protect the visually impaired caller, who stepped out of the house the suspect was in, and Sargeant got other arriving officers to provide cover from the suspect while giving lifesaving care to the victim.

Because the scene was unsafe, paramedics were staged down the street, so Sargeant picked up the victim and ran her to his squad car, driving her to a waiting ambulance. At this point, it was learned she had several life-threatening stab wounds that weren't visible.

After getting additional information on the incident, Sargeant ran back to the incident area, taking up a tactical role in the suspect's arrest.

The Janesville Fire Department said his actions contributed to the victim's survival, and his actions were "immediately recognized and complimented" by a citizen witness.

The Chief's Commendation stated that Sargeant's "performance and dedication are deeply appreciated and respected" and that he "strongly supports the mission of the Janesville Police Department."

Sargeant was honored on November 10.

Rail strike to be averted: Biden to sign bill

US hiring stayed strong in November as employers add 263,000

Much warmer today but staying windy

After a series of confusing statements released by police on the Idaho student killings, here's where the investigation stands