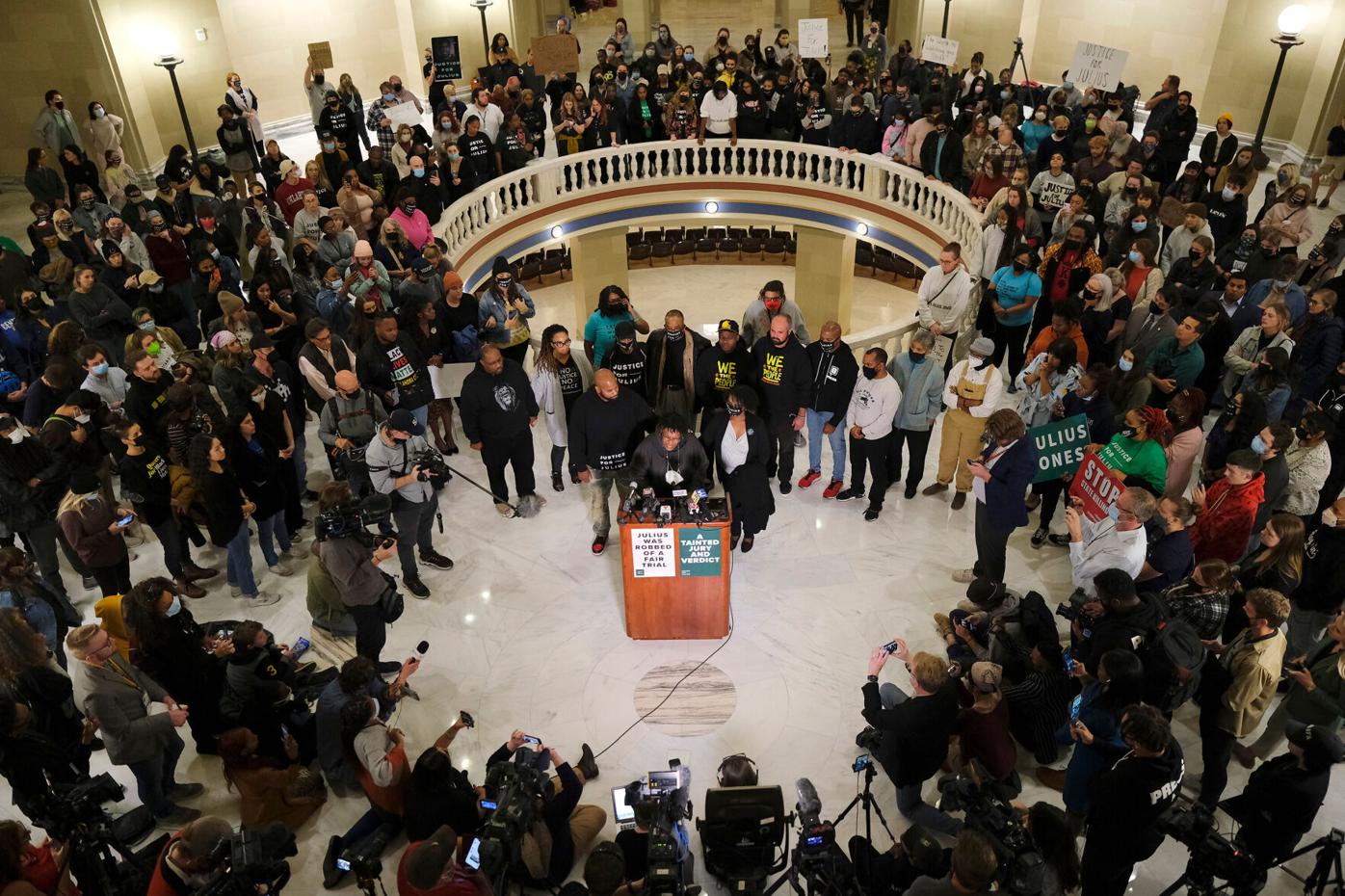 Madeline Davis-Jones and other family members and friends talk to reporters Wednesday at the Capitol in Oklahoma City. 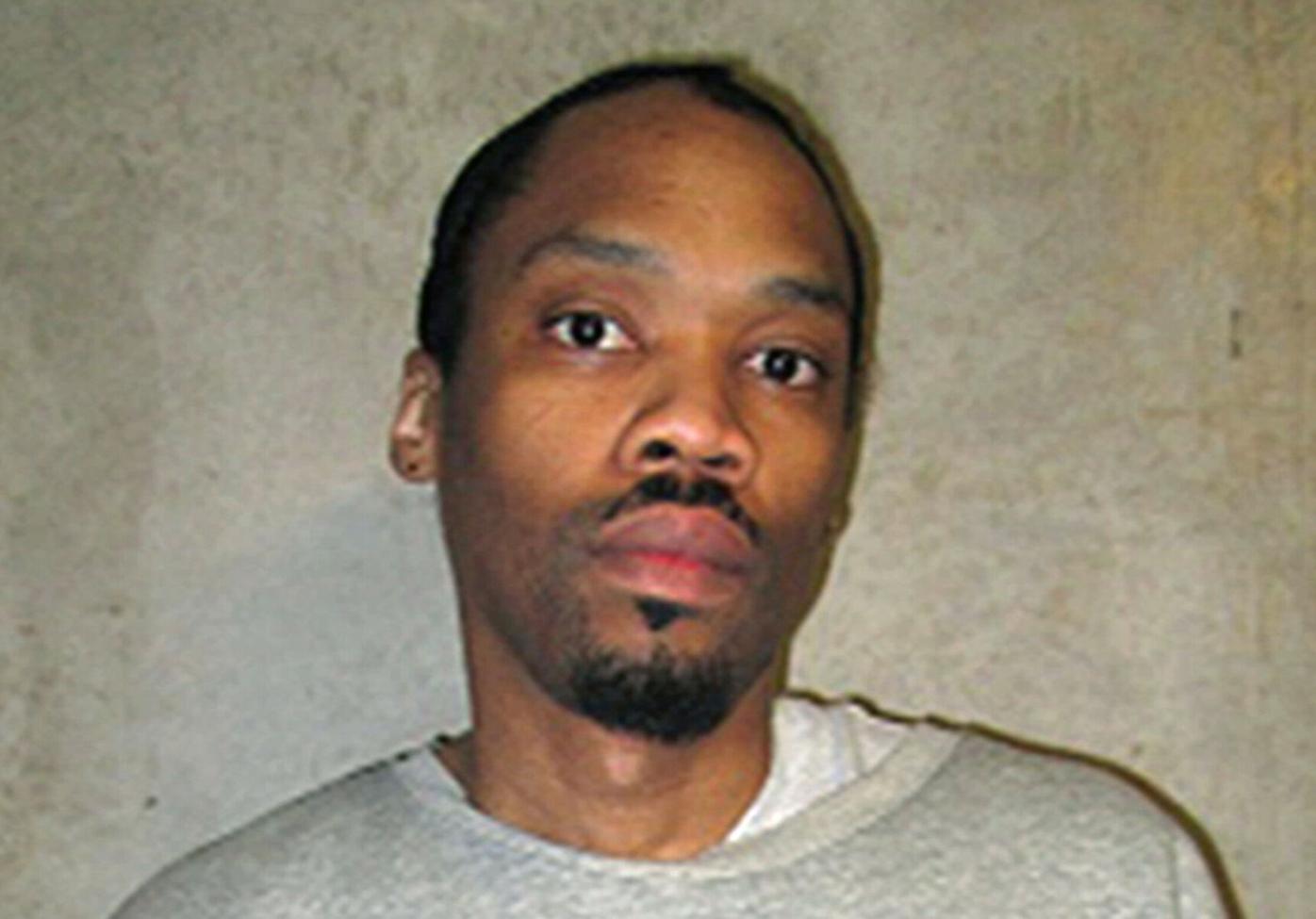 Madeline Davis-Jones and other family members and friends talk to reporters Wednesday at the Capitol in Oklahoma City.

Oklahoma Gov. Kevin Stitt has granted clemency to Julius Jones, commuting Jones' death sentence just hours before he was scheduled to be executed for a 1999 murder he says he did not commit.

Jones' sentence will be commuted to life in prison without the possibility of parole, according to an executive order filed Thursday. Jones was scheduled to be executed at 4 p.m. CT.

The Republican governor came to the decision following "prayerful consideration and reviewing materials presented by all sides of this case," he said in a statement on Twitter.

Oklahoma's Pardon and Parole Board had recommended Jones' sentence be commuted to life in prison with the possibility of parole in a 3-1 vote on November 1.

However, in his executive order, Stitt said neither the state constitution nor state law give the board the authority to recommend that commutation, nor do they give the governor the authority to grant it. As a result, the governor was commuting Jones' sentence with the condition that he "shall not be eligible to apply for or be considered for a commutation, pardon, or parole for the remainder of his life," the order says.

In her own statement, Jones attorney Amanda Bass called the governor's decision an "important step towards restoring public faith in the criminal justice system by ensuring that Oklahoma does not execute an innocent man."

But she acknowledged Jones' family and supporters had hoped he might get parole one day.

"While we had hoped the Governor would adopt the Board's recommendation in full by commuting Julius's sentence to life with the possibility of parole in light of the overwhelming evidence of Julius's innocence," Bass said, "we are grateful that the Governor has prevented an irreparable mistake."

The 11th-hour decision comes after years of protest over Jones' death sentence. He had been convicted of the 1999 murder of Paul Howell during a carjacking. Jones has been on death row for nearly 20 years, but he, his family, attorneys and supporters say he is innocent.

Jones' clemency petition says he's been on death row because of "fundamental breakdowns in the system tasked with deciding" his guilt, including ineffective and inexperienced defense attorneys, racial bias among his jury and alleged prosecutorial misconduct.

Howell's family remains convinced of his guilt, reiterating that belief in a statement.

"We know Governor Stitt had a difficult decision to make," the family said. "We take comfort that his decision affirmed the guilt of Julius Jones and that he shall not be eligible to apply for, or be considered for, a commutation, pardon or parole for the remainder of his life."

"Julius Jones forever changed our lives and the lives of (Paul Howell's) family and friends," the statement said.

Jones' case has attracted widespread attention in recent years, in part due to the ABC documentary series "The Last Defense," which spotlighted his case in 2018. And more than 6 million people have signed an online Change.org Justice for Julius petition asking Stitt to intervene and prevent his execution.

That support has only ramped up with the impending execution date. Supporters have gathered near the governor's mansion in Oklahoma City over the past few nights, and some even set up tents overnight, CNN affiliate KOCO reported.

At a news conference Wednesday evening, Jones' mother described her son's scheduled execution as a lynching.

"If you think Julius is guilty, give him a fair trial. Do it over again, do it right!" Davis-Jones said as the crowd erupted in applause. "If my child is executed tomorrow or any day, it should be without a doubt. Not even a little bit of doubt."

Reality TV star Kim Kardashian -- who has long advocated against Jones' death sentence -- actors Kerry Washington and Mandy Patinkin, and even professional athletes like Cleveland Browns quarterback Baker Mayfield have been using their voices in calling for the governor to spare Jones.

"It's a shame it's gotten this far," Mayfield told reporters Wednesday as he teared up. Mayfield played football at the University of Oklahoma. "Hopefully, God can intervene and handle it correctly and do the things He needs to do."

Support for Jones has also gone international, with a representative from the European Union weighing in via a letter to Stitt.

"We respectfully urge you to exercise all powers vested in your office to grant clemency to Mr. Julius Jones," wrote Stavros Lambrinidis, the EU Ambassador to the US.

Victim's daughter says the family has been 're-victimized'

Howell was killed in a carjacking the night of July 28, 1999. Around 9:30 p.m., Howell, his adult sister and his daughters pulled into his parents' driveway in his 1997 Suburban, according to court documents. Howell's sister told his daughters to gather their belongings and was exiting the vehicle when she heard a gunshot, court documents say.

Howell's sister glanced back, court documents say, and saw a Black man who she said was wearing jeans, a white T-shirt, a black cap and a red bandana over his face. The shooter fired again as Howell's sister and his daughters ran to the house, documents say. Howell died about 1:45 the next morning.

Jones, 19 at the time, was arrested on July 31, the day after authorities found the murder weapon wrapped in a red bandana inside his family's home.

He was tried alongside a co-defendant, Christopher Jordan, who was sentenced to 30 years in prison after pleading guilty to first-degree murder and conspiracy to commit a robbery, per online court records. Jordan testified against Jones, who was convicted and sentenced to death.

Howell's daughter, Rachel Howell, and her family believe Jones is guilty of her father's murder. She said in a statement to CNN that Jones, his family and the defense team "want people to believe that Julius Jones is completely innocent, despite the overwhelming amount of evidence against him."

"Overall, this has been extremely tough on our family," she said, "as we have continued to be re-victimized by Julius Jones when we have done absolutely nothing wrong."

Davis-Jones, Julius Jones' mother, has said the last two decades have been "a waking nightmare for my family," but she said she will keep the Howell family in her prayers.

"I know what it is like to have a loved one ripped away from you and to constantly relive that loss. I hope and pray they find healing and peace," Davis-Jones said.

There are conflicting stories about the evidence in Jones' case

The case has been marked by stark conflicts over the evidence against Jones, as well as questions about the reliability of the testimony of his co-defendant.

First, there's the alibi. Jones' family said he was home the night of the murder, according to the clemency petition.

Then-Attorney General Mike Hunter's office said the alibi was thoroughly investigated and found not to be credible, adding the claim was explored in an evidentiary hearing ordered by the Oklahoma Court of Criminal Appeals.

Jones himself was inconsistent about where he was the night of the murder, the AG's office said, adding two of Jones' trial attorneys testified he told them his family was mistaken and he was not home when Howell was killed.

Another point of contention has been over a red bandana, which was found inside Jones' family home with the murder weapon wrapped in it.

The clemency petition cites several individuals who said his co-defendant, Christopher Jordan, admitted to killing Howell and hiding the weapon and bandana inside Jones' house.

The petition also said Jordan spent the night at the home a day after the murder.

Jordan was released from prison in 2014, according to Jones' clemency petition. An attorney for Jordan, Billy Bock, told ABC News in September that "Chris Jordan maintains his position that his role in the death of Paul Howell was as an accomplice to Julius Jones. Mr. Jordan testified truthfully in the jury trial of Mr. Jones and denies 'confessing' to anyone."

The AG's office pointed to DNA testing done at the defense's request on the red bandana. The results, the office said in a document released in July 2020, indicated the major component of the DNA profile matched Jones and excluded Jordan.

In response, Jones' team said the DNA tests results were limited, and Jordan's DNA could not be excluded.

The jury was also not shown a photo of Jones, taken days before Howell's killing, that the petition says would have shown he did not match the shooter's description. Several jurors have come forward and indicated this evidence might have changed the outcome of the case.

Then there's the issue of alleged racial bias in the case. According to the petition, one juror said they heard another juror refer to Jones as the n-word. Additionally, when Jones was arrested, a police officer also called him the n-word, the petition alleges.

The AG's office contests claims of racial bias, noting the juror who claimed to have heard another use the n-word did not specifically raise the issue during Jones' trial. She had brought to the court's attention another comment made by a juror, but per the AG's office, an appellate found it unlikely the juror would fail to mention the racial epithet when she'd reported the other comment.

Jones and his supporters, however, have similarly repudiated these arguments.

Correction: An earlier version of this story incorrectly attributed a quote. It was the clemency petition that stated Julius Jones has been on death row because of "fundamental breakdowns in the system tasked with deciding" his guilt.